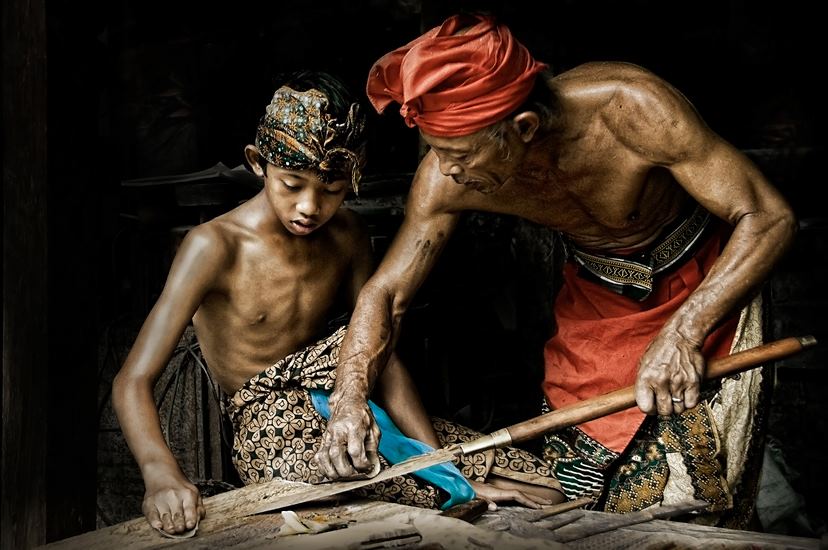 A story of extraordinary difficulty and chance encounters, in the great quest to discover a Master Blacksmith for the love of creating great hand tools used in traditional agriculture.

Back in 2011 I wanted to start my own tool company now known as “Permaculture Tools,” to be able to supply good quality hand tools to the permaculture community. In my pursuit of this I wanted good quality handmade tools as the corner stone of the company. I decided that I would go to Bali, where I had bought some sickles from in the past, in the endeavour of finding a good blacksmith to make my designs. I was there for two weeks searching a large amount of the island on my bike (my recent trip I filmed some can be viewed on my You-tube page http://www.youtube.com/user/permaculturetools), with more than a week having gone past before I had found a few blacksmiths and quite a lot of tools, although there was nothing that really grabbed my attention in what I had seen. I had however developed a very sore bum tying the hotel pillow to the bike seat!

After a lot of research I found a blacksmith who did demonstrations for tourists and was rumoured to be good and so found out which town he worked in. It was an hour and a half bike ride away through a lot of back country and not a big town. Considering Bali’s maps are not accurate at all, (this is so the tourists do not go out of the tourist area without hiring someone to drive them and there are almost no signs) I decided to get someone to take me as I may have needed a translator so decided to kill two birds with one stone. Having asked the local drivers who wanted $200AUD, I laughed at them and told them $50 fuel is very cheap, that it is subsidized and the price has not changed in 7 years! They just ignored me and kept on playing chess. One of them came over to me as I left and said on the quiet he would do it for a $100AUD, but I could not say anything as they all had an arrangement not to undercut each other. In that way they could always hope to get a high price. I don’t mind helping others to make a living, but prefer to be fair about it.

But I had told him $50AUD or nothing, to which he walked off. I then decided to go down to the beach to the Wayangs and asked a group I had spoken to earlier that week who spoke good English if they would be interested. As they were discussing where the town was and how to get there in Indonesian, a very well dressed Balinese lady got off her beach lounge and walked up the beach toward the men who were still having their discussion about how to get to the town, then turned and spoke to me and said, “You do not need to go all the way over there if you want good tools!  There is a tool-maker not far from here who makes really nice tools. It is where my husband gets all his tools made, but he does not speak any English and one of these men will have to go there first to make sure it is ok for you to go and see him. I have told them where to go.” She then said, “Good luck,” and walked off. One of the men said that he would help me and that he would go and find the tool-maker and then come back. He then kindly offered me to sit down and have lunch at his Wayang while I waited for him to return.

After some time he returned and said that the tool-maker would be happy for me to come and discuss business and that we could go now. He took me on a journey into the poor suburbs down a load of back streets then he turned into a small dirt ally which had no signage of any kind. At the end of the small dirt lane he stopped. There was a small open shed no bigger than a single garage attached to the side of a small shack, (house) and not much bigger. This was the Blacksmith’s home and workshop. I was introduced to the blacksmith did not speak any English and the man from the wayang on the beach did not speak fluent English, but we made do.

One thing I had noted and continued to note from there on was the level of respect given to the blacksmith. This was from a number of individuals that helped me with translation and the cargo companies I used. It was also given to him both from individuals who did not know him or who had simply just heard of him. At first I thought that this was as a result that we had just met and that they were there helping me. I would later realise there was far more to this, (took a while to click, the language and cultural barrier did not help – I never had great translators). In essence, I had a conversation of sorts with the blacksmith about making tools and what he could do. He later showed me some samples and I was quite impressed, but I needed to know if he could custom make something for me that was different to his own traditional tools, and in relation to my particular needs.

In turn I showed him some plans I had drawn up, being mainly interested in getting some rice knives, (serrated sickles) done. I had found a cheap sample in the capital, which I also show him. He immediately said, “It was cheap crap!” He was right! I then asked him to make me a sample like this but to the drawings specifications.

He asked me what I did and I told him I was a organic farmer who worked with small hand tools and that I wanted to start selling good quality hand tools to other farmers like me. He agreed to make the sample for me and to come back in a couple of days when he would have it ready. In those few days I searched around riding all over the place to find other tool-makers and where else I might be able to find hand tools of interest. I found a few but none were very good, or of reasonable quality. I then went back to the blacksmith to look at the sample tools that he had made.

He had made two samples, with the angle and the curve of each blade being slightly different from each other. They felt really nice in the hand and I asked if I could cut some of the grass and vegetation nearby, to which he said would be fine. I walked over with what I thought looking at the samples would be the lesser of the two. Turning back I noticed I had a small audience of the blacksmith and his apprentices and my translator! I started cutting and quickly, (I can cut quick with a rice knife as I’ve had a lot of practice!) It was sharp, very sharp and good, really good! I was then eager to try the other one. It was even better and the angle and curve made it even faster to use, so I mowed down two square metres in seconds!

I was impressed! My translator called out to me and said he (the blacksmith) said, “You ARE a farmer!” I replied that is what I told him. My translator then reiterated, “But he didn’t believe you! Now he believes you and now he TRUSTS you. Now he can do business!” The blacksmith had a huge smile on his face. I said that they were very good but this one is the better of the two as it had a better angle and curve. The blacksmith agreed this was the better of the two.

A relationship ‘forged’ by the love of great hand tools had begun. I secured the making of the rice knife and a traditional large sickle and returned home. With the success of these tools I was out of stock of the large sickle and low on the rice knife, so I returned a year later to see my Master Blacksmith. With excitement and anticipation I went to see him the day after I arrived, (as I arrived late the night before) keen to see him to get more tools made even though I did not have a translator, (that was interesting). He went and got someone from down the street who he knew spoke English.

We arranged a time for me to come back with a translator to discuss business. The next day we met at a very nice house which was his niece’s home, (she was going to translate for us but I also brought someone with me who spoke very good English). We discussed the making of a much larger amount of tools and a wider range this time. Photos and tool drawings were given and explained to the blacksmith. We then decided on names for each tool in Indonesian to make things easier and a numbering system and prices were given. I would then return in a couple of days after crunching numbers and decide on qualities of each tool.

This is how Permaculture Tools (www.permaculoturetools.com.au) was born.

About the Author: Danial Lawton

This site uses Akismet to reduce spam. Learn how your comment data is processed.